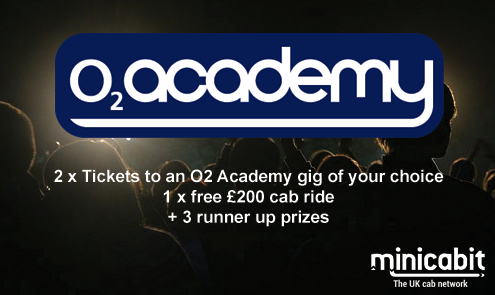 As the trusted cab booking service across 14 O2 Academy Venues throughout the UK, we at minicabit have got our hands on a fantastic prize for you this summer!

The top prize we’re giving away are 2 tickets to a gig at an O2 Academy venue of your choosing. I know what you’re thinking… “That’s great and all, but I live in Birmingham and the gig I want to see is at the O2 Academy Oxford”. Well there’s no need to fear as the winner will also be receiving a cab ride to and/or from the concert up to the value of £200!

And just because we’re that nice, we’ll also be giving away 3 runner up prizes of £30 off a future minicabit booking!

So just follow the instructions below for a chance to win your dream trip to an O2 Academy gig of your choosing where you could end up seeing artists such as Sam Smith, Clean Bandit, La Roux, Alt-J, Professor Green or even UB40.

Entering the competition is super simple!

The competition is open to enter until 5pm on Thursday 10th July 2014.  We will announce the lucky winner the day after on the 11th of July 2014.