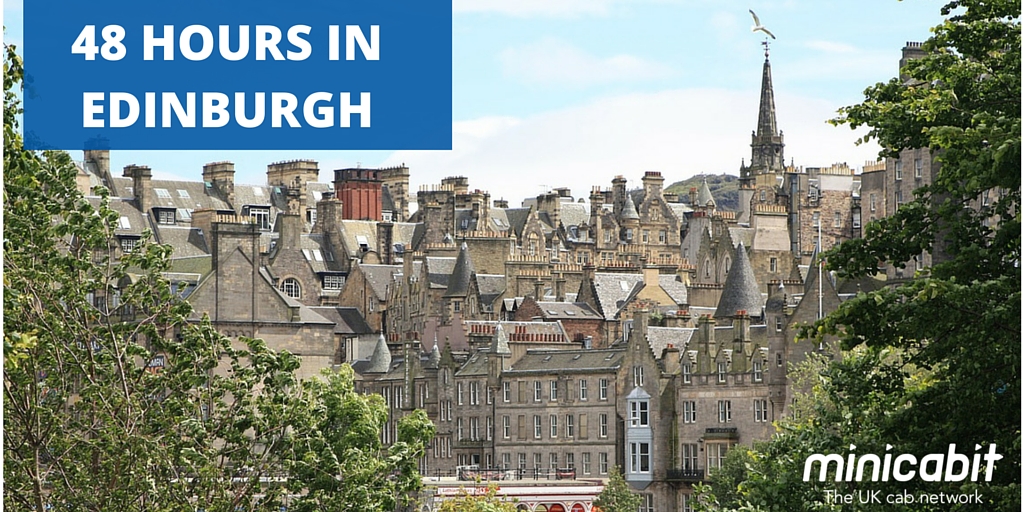 If you’ve only got 48 hours to spend in Edinburgh, here’s a must-see and do list of those essential, not to be missed Scottish city experiences.

First things first – a decent breakfast to fuel all the exploring you’re going to be doing! Mimi’s Bakehouse, on the shore, serves up some mouth-watering breakfasts, from porridge to Full English and everything in between (Banana Butterscotch French Toast, anyone?). If you’ve got more of a sweet tooth, then you have got to try Mimi’s showstoppers – the cakes. There’s vanilla, red velvet, chocolate and so many more flavours to try and choose from, vegan and gluten-free options, cupcakes, cheesecakes, tray bakes… If it’s sweet, they’ve probably got it!

For those who crave the Scandi-style of life, head to Hemma, a Swedish run pub that is perfect for those who love their home comforts (Hemma literally means ‘Home’ in Swedish!). Effortlessly styled inside, Hemma serves up a variety of delicious brunch options, and their Hemma Breakfast is bound to fill you up with a hearty serving of traditional Scottish haggis alongside the usual sausage, bacon, eggs, potatoes, mushrooms, tomatoes and toast. You’ll definitely need an appetite for that one!

After you’re all filled up with various breakfast goods, it’s time to burn it off and take a walk to the awe inspiring, 200ft-high Scot Monument. The monument was built to honour the Scottish historical novelist, playwright and poet Sir Walter Scott and was completed 12 years after his death in 1844. Under the structure, there stands a statue of a seated Scott, sculpted from Italian marble by Sir John Steell. If you’re up for a spot of statue hunting, there are 64 smaller sculptures dotted about, most of which are characters taken from Scott’s novels. For those wanting to challenge their fitness levels, you can climb the 287 steps to the top for just £3 for both adults and children. Once at the top, you can revel in the fantastic view of Edinburgh Castle and the Forth of Fife. It is definitely worth some aching legs

Refuel with some caffeine

Don’t settle for high street coffee, once you’ve had a local brewed espresso made by the most passionate baristas, you’ll never go back. And Brew Lab mean business. With exposed brick and distressed features alongside huge leather armchairs and metal chairs, the place beams with an industrial yet homely vibe. With ever-changing filter coffees and espresso blends, Brew Lab endeavour to make you the best quality coffee you’ll ever have. If you’re in on a Sunday, don’t miss their theatrical syphon-a brew method, combining immersion brewing and stable temperatures to produce an elegant and aromatic coffee. Yep, these guys sure know what they’re doing!

Where is the only place in the UK that you can see live giant pandas and koalas? Edinburgh Zoo, of course! This popular attraction is the second most visited in Edinburgh after Edinburgh Castle, and we can see why! The giant panda’s, Tian Tian and Yang Guang, were loaned to the zoo by the Chinese Government on a breeding programme. We always keep our fingers crossed for tiny panda cubs! The zoo is also well known for it’s funny penguin enclosure, the Budongo Trail, a special building for the chimpanzees, and the Koala Territory, home to the UK’s only koalas. Tickets are £18 for an adult, £13.50 for children (children under 3 go free!)

Get your giggle on

With Edinburgh’s hugely influential Fringe festival, you know this city takes it’s comedy and performance seriously! The Stand is Edinburgh’s flagship comedy venue with many of the world’s biggest comedy stars having shared the intimate stage at some point in its life. Local comedians, like Frankie Boyle and Kevin Bridges, will pop up to the stage now and then to give new material a whirl. The Stand also serves up some ridiculously good grub and refreshing locally made beer. This place should be on every comedy lover’s to-do-list.

There’s no doubt about it, you simply have to visit this Scottish icon and marvel at the amazing view it offers from Castle Rock. The attraction focuses on the Castle’s rich Royal and military history, with the large open square outside accommodating the Castle Concerts and Edinburgh Military Tattoo in summer. Inside the Castle are multiple attractions, such as St. Margeret’s Chapel, supposedly the oldest building in Edinburgh, dating back to the twelfth century, the fine rooms of the Royal Palace and the Prisons of War, located in the depths below the Great Hall and Queen Anne Building. Tickets for the day are £16.50 for adults and £9.90 for children.

Get organised and book a cab ahead of time to avoid waiting around and make the most of your limited time in this amazing city.